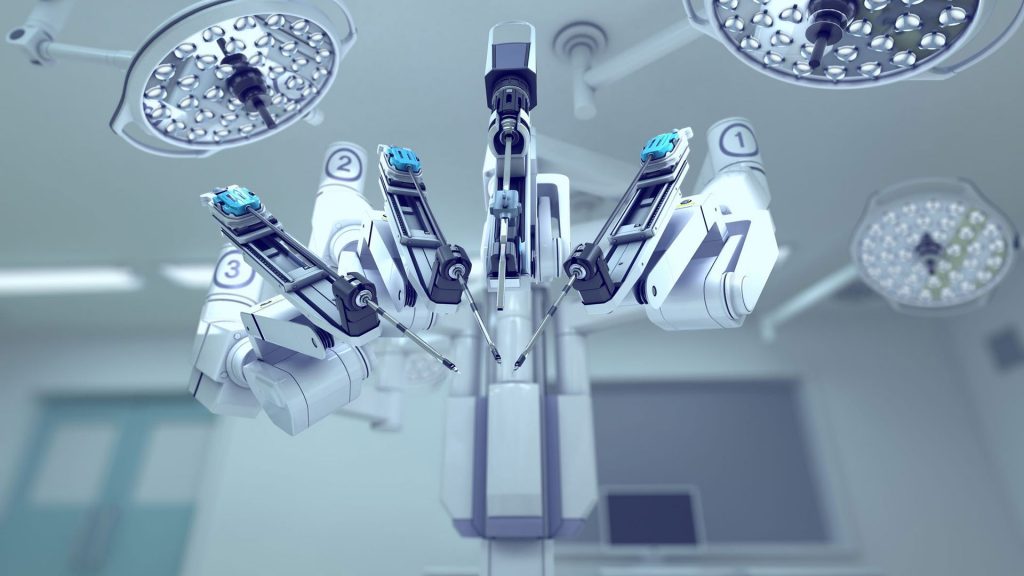 Laparoscopic and Robotic surgeries, also called minimally invasive surgery (MIS), keyhole surgery is a modern surgical technique in which operations in the abdomen are performed through small incisions (usually 0.5-1.0 cm) as compared to the larger incisions needed in laparotomy.

Laparoscopic and Robotic surgeries includes operations within the abdominal or pelvic cavities in Urology.

There are a number of advantages to the patient with laparoscopic and robotic surgeries versus an open procedure. These include reduced pain due to smaller incisions and hemorrhaging, and shorter recovery time.

Minimal invasive surgical procedures specially developed for Urologic Surgery employ video cameras and lens systems to provide the surgeon with anatomic visualization within the pelvis and the entire abdominal cavity during the procedure. The abdomen is usually insufflated, or essentially blown up like a balloon, with carbon dioxide gas. This elevates the abdominal wall above the internal organs like a dome to create a working and viewing space. CO2 is used because it is common to the human body and can be absorbed by tissue and removed by the respiratory system. It is also non-flammable, which is important because electrosurgical devices are commonly used in laparoscopic procedures. One 1 cm incision in the navel is used for introduction of the laparoscope which allows optimal vision with magnification (up to x 15); Two to three further 5mm incisions in the lower abdomen permit insertion of narrow tubes for introduction small instruments to perform the surgery. The surgeon is able to view the surgical field on a video monitor which receives its pictures from a video camera attached to the laparoscope.

There are a number of advantages to the patient with laparoscopic surgery versus an open procedure.
These include:

We routinely perform the following procedures by laparoscopy:

Laparoscopic management of painful pathologies of the pelvic nerves

Robotic management of painful pathologies of the pelvic nerves

Laparoscopic & Robotic Managements of Pathologies of the Pelvic Nerves and Plexuses

Introduction
The pelvis not only contains different organs such as the rectum and urogenital organs, but also pelvic nerves, involved in sexuality and the control (voiding and storage) of the pelvic organs as well as locomotion. They are also involved in the transport of all sensitive information generated in the lower limbs and pelvis to the central nervous system. Damages to the pelvic nerves therefore lead to pelvic visceral dysfunctions, problems with locomotion and different kinds of pain.

Laparoscopy Enables Surgery To The Pelvic Nerves. All the shortcomings mentioned above, implied by a limited access to the pelvic nerves and plexuses, can now be overcome with the availability of laparoscopy: the development of video endoscopy and microsurgical instruments enables a unique access to all pelvic nerves and plexuses, providing the necessary visibility with magnification (15x) of the structures and the possibility to work with appropriate instruments.

Nerve fibers are present everywhere in the body; Some of them are transmitting information from the periphery to the central nervous system (afferent nerves), others transmit information from the brain to the periphery (efferent nerves). The “somatic nerves” are large nerves which contain both afferents and efferent fibers designated to the red muscles (lower limb, sphincters…). They are running freely into the pelvis, directly along the pelvic sidewall. These “somatic nerves” are the femoral nerve (quadriceps muscle / pain in the anterior area of the tight), the obturator nerve (adduction / pain in the interior face of the tight), the sciatic nerve (pain in the dorsal face of the entire lower limb; “sciatica”), as well as the gluteal nerves (buttock, standing up) and the pudendal nerves (continence, genitoanal pain).

Damages to the pelvic nerves caused by compression, irritation or entrapment lead to neuropathic pain in the first place, but can also lead to other dysfunctions, such as difficulties to void the bladder, urinary or faecal incontinence, troubles of erection, or locomotion. When damages to the nerves also include any destructions of fibers of the nerve itself (=axonal lesions), pain and dysfunctions are worsened and usually accompanied by reduced skin sensibility (partial or complete loss of sensation) in the corresponding dermatome (=the skin area innervated by the affected nerve).

While the identification and diagnosis of the affected nerve(s) is usually not a serious problem, the evaluation of the actual location of the lesion (periphery vs pelvis vs spinal cord vs head) is much more difficult: the lesion that induces the pain and dysfunction is usually not located where the patient actually feel the pain, but higher above. The best example for this phenomenon is the so-called “phantom pain” , secondary to leg amputation. Because the nerves, which are normally designated to transmitting information from the foot to the nervous system, are still working and still transmit pain information, the patient actually feel pain in the foot, although the leg has been amputated.

The most frequent somatic pelvic pain is sciatica, with pain in the different sacral dermatomes, such as in the lower back, pelvis, pudendal area, buttock, including irradiations in the dorsal aspect of the thigh, the calf, and sometimes even in the foot (figure 2). The second most frequent somatic pelvic pain is the pudendal pain (by lesion of the sacral nerves roots, or by lesions of the pudendal nerve itself = Alcok’s canal syndrom). This pain is typically located in the genito-anal regions and buttock, and increases when sitting or riding a bicycle.

In practically all patients suffering from sciatica and/or pudendal neuralgia, or any other pelvic neuralgia, endopelvic pathologies have to bee evocated as a potential reason, as long as no other orthopedic or neurosurgical reasons can be found.
Laparoscopy is the only method which enables us to confirm diagnosis and to treat the patient at the same time. The most frequent etiologies consist of lesions to the nerves, secondary to surgeries by cutting, suturing or coagulation of nerves, compression/irritation of nerves by scar tissue or enlarged vessels (=vascular entrapment), compression/infiltration of the nerves by pelvic organs (enlarged uterus) or pathologies (cancers, endometriosis…).

When injuries to the nerves have occurred, laparoscopic exploration not only offers an anatomic and functional exploration of the nerves, but can also results in an effective neurosurgical treatment, using laparoscopic techniques of nerve decompression or reconstruction Laparoscopic management of neural pelvic pain in women secondary to pelvic surgery.

In non-postsurgical damages, systematic laparoscopic exploration has shown that not only pelvic cancers can induce nerves damages, but also frequent pathologies, such as deeply infiltrating endometriosis, uterine myomas or ovarian processes, or even retroperitoneal vascular abnormalities (vascular entrapment) and retroperitoneal fibrosis. They also can induce pelvic neuropathies which can be treated by laparoscopic nerves decompression/neurolysis. Laparoscopic neurolysis of the sacral plexus and the sciatic nerve for extensive endometriosis of the pelvic wall.

Laparoscopy is therefore the essential and logical step in the management of pelvic nerve pathologies that must be indicated as soon as possible, before the nerve damage becomes irreversible and before the process of “pain chronification” begins.

Contact us for more info about Pudendal Nerve Decompression